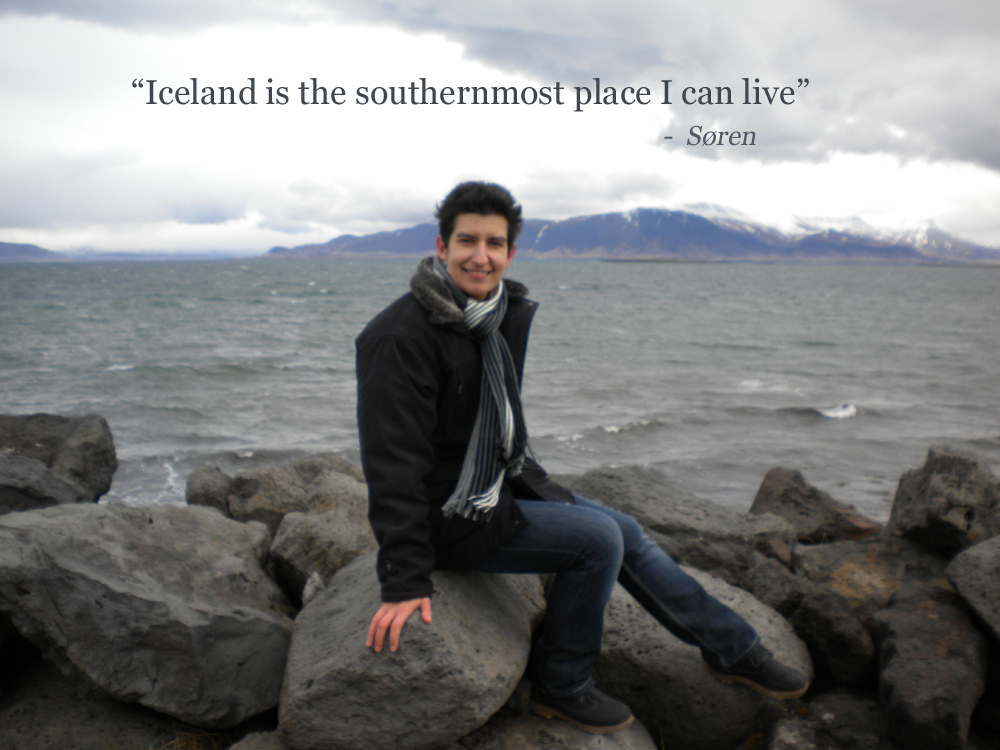 Tell us a bit about the city where you live now and your hometown. What is it like to live there? What makes them special? How are they different?

Reykjavik, is an ideal destination or residence, a capital city in the size of a village. All natural beauty someone could expect in the middle of nowhere, within a city center. Clean, colourful, safe, tolerant.. Ilulissat [Grönland] and Odense [Dänemark] … I would rather not give you a description of what they looked like in 1993, the last time I saw them.

“What do you like most about your home country? And about the country you are currently living in?”

About Greenland.. The culture, language, traditions, mythology.. The extreme weather, and endless polar nights of the arctic winter.. About Iceland, its tolerance and respect of personal identity.. The country where you can be who you really are. The same goes for Denmark, plus the language.

“And what are the things you don’t like about those countries?”

After my violent experiences the fourth country, I just find the three of them perfect..

“Did you face any problems with your expat status?”

I was waiting quite long to get my icelandic passport. And yes, I still have problems because of that fourth country mentioned, with which I am not related by origin or anything. I just happened to be there as a child due to parents´ immigration. But better to concentrate on good thoughts. I
am grateful for being able to get the icelandic passport at some point, or even to feel safe in Iceland, so that my past won´t haunt me any more.

“Would you like to live somewhere else? To return home? If yes, where and why? If no, why not?”

I imagine my future in the North-Greenland. I identify with the extreme north, and the Greenlandic culture. Iceland is the southernmost place I can live. I don´t want to use the word „return“ home though. My home is currently Iceland. Sometimes it is weird not to have the traditional „going home“ to a native land where the family lives etc. My parents live in that country where I would never even think to be in, even for one minute.

“What should someone who visits your home country / the country you live in do and see?”

Iceland: I always recommend people not to only emphasize the trips around the island and miss Reykjavik and its beautiful surrounding towns! Seltjarnarnes, Hafnarfjörður, Álftanes etc.. A long network for sidewalks by lakes, rivers and beside the ocean.
Greenland: Meet the culture, language, and traditions.. meet the people more than the landscape.
Denmark: I would rather talk about specific parts, than the whole country.

“And what should they definitely not do?”
Watch the whales, but not eat them..

“What are your favourite meals of your traditional cuisine? What do you think of the local cuisine of your current living place?”
Being mostly a vegetarian I have hard time with food in all the above mentioned countries, unless I cook by myself. I can suggest traditional dishes, though I don´t eat any of them. The only thing I would definitely recommend in Denmark and Iceland are the bakery and diary products, and there is a great variety of them. And if you like liquorice, it is everywhere.

“And how about drinks? What drinks should we try when we visit?”

I don´t drink (haven´t ever) alcohol. So, I guess I am not the right person to guide you in this part. And I don´t think there is a characteristic non alcoholic drink, or at least I can´t think of any.

“How do you get around in your country? Do people use public transport or do you prefer not to? Why?”

Most people in Iceland use cars. There is a bus system which (finally) covers the whole country, and of course city of Reykjavik. Reykjavik is small, but very wide, so the distances are quite long. Personally, I prefer walking, even if it takes 20 km or more. Transport in Greenland is very difficult and a long discussion, as for Denmark, it is a good chance for cycling within the cities, and railway in between.

“Which artists should we check out of those countries? (authors, musicians, painters …)”

Music.. I would recommend the following: Nanook (greenlandic rock band), Julie Berthelsen (Danish-Greenlandic) and Sume (A famous rock band which played a political role as well) and also Liima Inui. I would also recommend the Greenland Eyes film festival. As for literature, I would rather recommend books than authors.

“What does your ordinary day look like? Do you think it’s a typical everyday’s life for people in your living place?”“If not: How would you say *is* a typical everday’s life there? How is this different to your home country?”

My day is not a typical day for an icelander of my age. I work, study, and do several activities, music or sport. I have no children by choice (which is exactly rather unusual) and I don´t like partying, pubs, and nightlife in general. A difference between Iceland and Greenland is the closer connections between people in Greenland. And the less „western“ lifestyle.

“What’s the best season for visiting your country? Why?”

“And your current living place? When should we go there?”

Same as above. I would again prefer December, adding the Christmas spirit all over Reykjavik.

“Tell us something about traditional activities, festivals or holidays in your home area. Which do you enjoy most? How do you celebrate them?”

The summer solstice day, which is also the national day of Greenland. Also in the northernmost areas, the return of the sun after the dark months. As for activities: Kayak, dogsleds, hunting (mainly sea hunting). There is an interesting fact about New Year. It is celebrated twice, in danish time, and greenlandic time. Which means at 20:00 and at 00:00.

“Are there local traditions / holidays that surprised you a lot when you came to your current place of living? Or that you liked or disliked particularly?”

There are a few weird things about Iceland. An interesting holiday is the first day of the summer which is the first thursday after 18th of April. According to the norse calendar which still works in this case, there are two seasons winter and summer. The summer enters in April and leaves in August. The national day of Iceland is on 17th June, and it doesn´t remind of usual national day patriotic celebrations. There is a festival on 3rd August in a small island few hours from Reykjavik, Vestmannaeyjar. It started in 1874, when the residents couldn´t participate in festivities for the millenium of the settlement of Iceland in the mainland, because of the bad weather preventing them from sailing, so they made the best festivities in their own island. There are also viking themed festivals and competitions in several towns. Christmas is a weird time, when everything in the city is closed for two or three days, so if you didn´t get any food from before, get ready for starving! It did happen to me.
The only thing I don´t like is.. that everything is related to a chance for extreme drinking and partying.

“Where would you like to travel in your life? Why?”

My biggest dream is to reach the North Pole. And of course anything northern, Svalbard, Nunavut, Alaska, Siberia.. I would like to see more of Africa but as the previous time, living among the natives (I have been in Senegal and it was a great experience)

“Most of my readers are from Germany and Austria. What comes to your mind when you think about these countries? Are there any stereotypes about Germans or Austrians in your country?”

I travelled in Germany and what comes to my mind is my own experiences. I like the fact that Germans appreciate their language a lot, something that unfortunately doesn´t happen in Iceland. It is disappointing that I really need to press Icelanders to talk to me in Icelandic, not english. And that is NOT because of racist attitude, but it is just because even they themselves often talk english to each other!! As for stereotypes, I haven´t really paid attention. In Iceland there are lots of Germans. I happened to know some in the past.

“What do you think: Which stereotypes exist about your country and its people? Are they correct – at least partly – or not?”

„IGLOOOOOOS!!!! You live in igloos, isn´t it? Does the igloo have a toilet?!“ Well.. Illu (greenlandic spelling of igloo) means a house, so yes, we live in them, and it does have a toilet..
Suicide and alcohol.. Yes, suicide rates in Greenland are unfortunately really high.. But no, not all population is alcoholic..
„Non-civilized“.. traditional lifestyle doesn´t mean lack of civilization, it means a strong national identity and/or no means or possibilities of living otherwise

„Wild vikings!“. not really. But the social freedom, yes, that is great.
„Elves and trolls“. Some people do believe they have seen them. Personally, I haven´t.

“If you could change one thing about the place where you live. What would it be?”

Nothing, I am lucky to be given a chance to live in this wonderful country.

“Your dreams for the future?”
Despite my wonderful experiences in the three countries, it was my horrible years in the fourth country that shaped my future dreams. To fight bullying, discrimination and social stereotypes as much as I can. Help child immigrants who experience abuse and violence, and victims of gender stereotypes. Besides that, the citizenship, that I finally got, was a big dream. And, I wait for the person I dream to spend my life with, to move to Iceland next spring, I plan to continue my nurse studies and see myself working as a psychiatric nurse, publish the stories I write, and explore the Arctic.